The longest underground adventure in the world is set to launch - adding another adrenaline pumping attraction to the region.
Five kilometres long the course includes the planet’s deepest zip wire, a seated zip ride, a 70ft freefall, and the deepest accessible point, 1,300ft underground. It’s a staggering five kilometres of pure underground adrenaline through some of the worlds most spectacular abandoned mine workings for an adventure that many people already have called the greatest trip of their lives.
The attraction includes a 130 metre underground zip line, and a massive zip ride. It takes all day to complete with nine zips, 14 traverses, three abseils, three bridges, and a freefall. 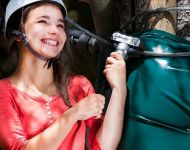