As climbing continues to grow in popularity and prominence, the role of climbing walls in Family Entertainment Centers is also in a state of flux. For years, climbing has been thought of as a secondary attraction by many FEC managers. However, for a variety of reasons, that perception is beginning to change, giving way to the more central role of climbing in the FEC activity hierarchy.

Depending on your activity mix and overarching business plan, the decision to introduce a climbing element into your facility isn’t as simple as chasing the latest trend. As with any new attraction, you not only have to weigh the pros and cons of the climbing wall itself, but also how it complements (or cannibalizes) ROI from the surrounding activities, as well.

Of course, when considering ROI, there are two major variables:

In this article, we’ll look at the issue from both perspectives. Let’s start with how climbing walls can help FECs to increase revenue and then move on to some cost-saving strategies that will maximize your long-term profit margins.

In terms of pure ROI, climbing walls rank lower on a per capita basis than perennial FEC core activities such as bowling or go-karts. Which begs the question: why are modern climbing walls so often touted as effective revenue generators?

The answer has to do with the mutually beneficial relationship between climbing walls and other popular FEC activities. More than almost any other element, climbing walls have the capacity to facilitate highly visible (and shareable) social interactions that bring energy and excitement to your entire facility.

Unlike traditional FEC anchor activities such as mini golf or laser tag, climbing walls have an unusually high spectator factor. On account of their sheer verticality, they are often the first thing to catch your eye when you walk into a new FEC and are among the most photogenic activities available, leading to increased engagement for parents and non-participants.

With the right floor plan and climbing wall design, this extra engagement can lead to a healthy combination of social proof, potential followers, and organic marketing content.

Along with the high spectator factor, climbing walls are also infinitely changeable – either by switching out holds or by adding a competitive aspect through playing popular climbing games. Having the ability to change features easily and often can help to drive higher rates of return customers and increase membership sales (potentially with an option to upsell from the basic membership package).

Similar to bowling, climbing equipment rentals can provide an additional source of revenue that goes above and beyond basic pay-to-play. Equipment rentals may include harnesses and, depending on the wall, climbing shoes.

When working with a top-flight climbing wall manufacturer such as Skywalker you can design optimal climbing walls for highly targeted age groups, including strikingly colorful or themed walls for climbers within the significant 8-12 age, range.

If you are looking for ways to expand your user base, you can implement more challenging walls that will be a bigger draw for teens and parents. In this case, you may want to consider offering climbing shoe rentals. Climbing shoes are much better at gripping small footholds than socks or standard sneakers.

Climbing is currently one of the fastest growing sports in the world. The rise of celebrity climbers on social media and the introduction of climbing in the Olympics in 2020 have driven an unprecedented rise in demand for climbing walls, particularly at the introductory level.

With a second climbing competition already added to the 2024 Olympic slate and major media outlets like HBO greenlighting climbing-related content, the sport’s explosive popularity is showing no signs of slowing down anytime soon. 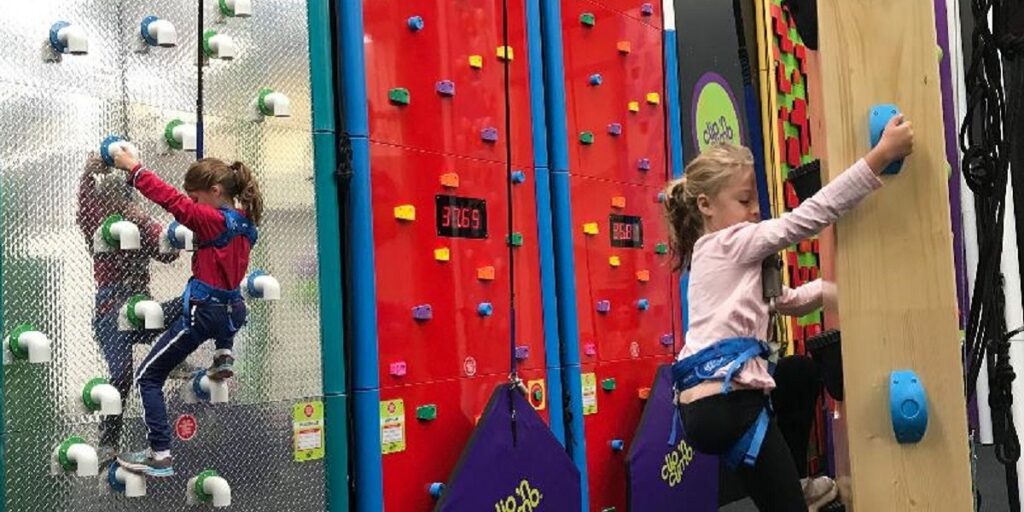 Beyond increasing revenues, the second prong of optimizing ROI is finding ways to reduce your operating costs. Unfortunately, in the FEC industry, reducing costs while maintaining the highest possible safety standards can be a difficult balancing act.

The solution is installing auto belays. Auto belays are modular devices that provide protection to climbers, without the need for trained belay partners or additional staff members.

Beyond saving you money on training and staffing, auto belays also have a much higher user throughput than a manual belay. For one thing, there are no knots required. A connector is attached directly into the front belay loop on the harness and then the user is ready to climb.

Tip: For an added layer of safety, many FECs prefer Self Belay connectors, rather than the standard locking carabiners. Self Belays give more control to the operator and reduce the risk of clipping errors.

There are several different types of auto belays, but with over 40,000 devices sold and over 2 Billion descents, the leading auto belay in the world today is undoubtedly the TRUBLUE.

Unlike other auto belays which rely on brake pads to lower climbers back to the ground, TRUBLUE Auto Belays use a patented magnetic brake system. There are several advantages to this system. Most notably, the frictionless approach to magnetic braking allows for extremely high cycle counts, without deteriorating performance.

TRUBLUEs are also certified to protect against dynamic loading. In other words, jumping. In an FEC, no matter how much you ask them not to, kids are going to get excited and they are going to jump. This sudden movement is especially hard on brake pads, but with magnetic braking, even when someone jumps, the descent remains smooth and consistent, without causing damage to the device.

The reduced wear on internal components also means that TRUBLUE has an extremely long lifespan. Over a decade after its original introduction into the climbing scene, the overwhelming majority of first generation TRUBLUE Auto Belays are still going strong today.

The recently released TRUBLUE iQ Series was designed to be even more durable and long-lasting than the original, while continuing to utilize the same, friction-free magnetic braking technology.